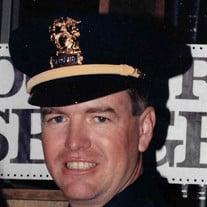 James T. Farrell, 61, of French Creek, passed away on Friday, December 1, 2017, at United Hospital Center in Clarksburg. He was born on January 24, 1956, a son of the late Bernard and Mary McDermott Farrell. In addition to his parents, he was also preceded in death by his brother, Bruce, and his sister, Jeanette. He is survived by his wife of thirty-five years, Diane Farrell, and his sister, Laura Grillet-Aubert, of NYC; his brothers- and sisters-in-law: Tony and Debbie DaSilva, of NJ, and Robert and Dawn Biniek, of CO; niece, Krysta, and fiance, Chris, of London; nephew, David, and girlfriend, Kristin, of TX; and several cousins. Jim proudly served in the US Army and had a long and distinguished career as a civil servant. He was assigned to the Armed Forces Police Detachment, served in the 77th Army Reserve Command, was a NY State University Policeman at Stony Brook University on Long Island, worked as a NYS Park Policeman, and was the supervisor of the Highway Patrol Motor Carrier Safety section of the Suffolk County Police Department. Jim was a volunteer fireman in NY, and was also in the Banks District Volunteer Fire Department. He was a member of Central WV Fraternal Order of Police Lodge 114, the WF Fusion Liaison Program, Create Buckhannon, Local Emergency Planning Committee, Upshur Safe Sites and Structures Board, and Board of Directors of the Appalachian Community Health Center. He was the Manager of the Upshur County Office of Emergency Management until December 2016. Jim and his wife rescued many abused and abandoned animals in NY and WV. He was loyal, hard-working and kind, and will be missed by all who knew and loved him. At the request of the deceased, the body will be cremated and a Celebration of Life will be held on Saturday, December 23, 2017 from 2-4 PM in the upstairs banquet room of C.J. Maggie's Restaurant on Main Street in Buckhannon. In lieu of flowers donations may be made to the St. Joseph’s Foundation, 1 Amalia Drive, Buckhannon, WV 26201.

James T. Farrell, 61, of French Creek, passed away on Friday, December 1, 2017, at United Hospital Center in Clarksburg. He was born on January 24, 1956, a son of the late Bernard and Mary McDermott Farrell. In addition to his parents, he... View Obituary & Service Information

The family of James T. Farrell created this Life Tributes page to make it easy to share your memories.

Send flowers to the Farrell family.