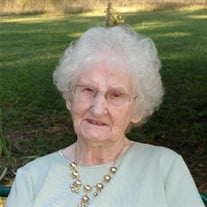 Irene Iris Tenney, age 91, formerly of the Alexander Road, French Creek, left her earthly home to be with the Lord on Friday, January 19, 2018, at Holbrook on the Hill. She was born on March 6, 1926, in Alexander, WV, a daughter of the late Grover Cleveland and Harriet Pringle Russell. Irene spent her entire life in West Virginia and it was there she met her husband, Gerald O. Tenney, to whom she was united in marriage on August 7, 1943. The couple shared 62 years together until his death on May 5, 2005. Together, the couple had three children: Deloris and husband Maurice Hyre of French Creek, Duane Tenney and wife Bonnie of Ashtabula, OH, and Greta and husband John Goodwin of Amherst, OH. Also surviving are five grandchildren: Randall Hyre and wife Jeannie, Donald Tenney, Sindy Rady, Trina Tenney, and Rick Adams; thirteen great grandchildren; nineteen great-great grandchildren; one sister Gilsie Tenney; one brother Claude Russell; and several nieces and nephews. In addition to her parents and husband, she was also preceded in death by two sisters: Lena Russell Tenney and Thelma Russell Marsh; and three brothers: Darrel, Harold, and Eugene Russell. Life was often a struggle for Irene and Gerald as times were hard in West Virginia for many back then. Together, they built a small home on the Alexander Road, added on to it when they could, and raised their family. Irene loved her flowers and was always quite fanatical about her yard and flower beds. She liked her yard properly mowed, and in the fall you’d often see her busy raking leaves. Irene enjoyed doing needlepoint, watching older shows on television, and was quite a cook. If you stopped to visit, she always wanted to feed you…and feed you she did! She was never happy unless the table was full of food. Irene and Gerald were both long-time members of the Bethlehem Church. After Gerald passed, and Irene’s health declined, she spent hours on end, day after day, watching Rev. Jimmy Swaggart on television. It didn’t matter who was there, the TV was on and that’s what you were watching. Irene was strong in her faith and will be missed by all who knew and loved her. The family will receive friends on Sunday, January 21, 2018, from 1-3:00 PM, at the Heavner and Cutright Funeral Chapel. The funeral will be held on Monday, January 22, 2018, at 11:00 AM, at the funeral chapel, with Pastor Will Kerns officiating. Interment will follow in the Bethlehem Cemetery.

Irene Iris Tenney, age 91, formerly of the Alexander Road, French Creek, left her earthly home to be with the Lord on Friday, January 19, 2018, at Holbrook on the Hill. She was born on March 6, 1926, in Alexander, WV, a daughter of the late... View Obituary & Service Information

The family of Irene Iris Tenney created this Life Tributes page to make it easy to share your memories.