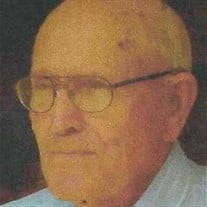 Herbert Hoover Tolliver, age 89, formerly of Crawford, passed away Tuesday, October 9, 2018, at the West Virginia Veterans Nursing Facility in Clarksburg. He was born November 6, 1928, in Upshur County, a son of the late Hugh and Ora Heavner Tolliver. On November 19, 1966, he was united in marriage to Freda Gay McCartney Curtis Tolliver, who survives in Buckhannon. Also surviving are two step daughters: Phyllis McCartney and husband Raymond of French Creek and Patricia Curtis of Crawford; four step grandsons: Michael Hall and wife Tina of Webster Springs, Randall Hall and wife Donna of Walkersville, Steve Hall of Walkersville, and Kenny Hall and wife Beckey of French Creek; seven step great grandchildren; one step great-great grandson; one sister-in-law Lorraine “Tillie” Tolliver of PA; and several nieces and nephews. In addition to his parents, Herbert was also preceded in death by three brothers: Rex, Russell, and Donald; two sisters: Hazel and Nellie Lane; two nephews; and one niece. Herbert enlisted with the U.S. Army on February 6, 1947, and was honorably discharged on June 30, 1948, after serving overseas as a corporal with the Military Police. He worked with this father on the railroad for a time, and then spent the majority of his adult life as a carpenter, building many homes. He loved the outdoors, especially hunting, fishing, and trapping. In later years, his interest turned to finding and transplanting wildflowers and he particularly enjoyed cultivating and tending his ramp patch. In addition, he was an avid reader. The family will receive friends on Thursday, October 11, 2018, from 5–8:00 PM, at the Heavner and Cutright Funeral Chapel. The funeral will be held on Friday, October 12, 2018, at 11:00 AM, at the funeral chapel, with the Rev. Robert F. Heavner officiating. Interment will follow in the Wimer Cemetery at Straight Fork.

Herbert Hoover Tolliver, age 89, formerly of Crawford, passed away Tuesday, October 9, 2018, at the West Virginia Veterans Nursing Facility in Clarksburg. He was born November 6, 1928, in Upshur County, a son of the late Hugh and Ora Heavner... View Obituary & Service Information

The family of Herbert Hoover Tolliver created this Life Tributes page to make it easy to share your memories.

Send flowers to the Tolliver family.