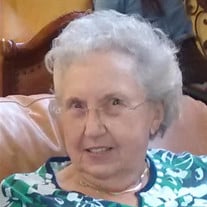 After a prolonged sickness on July 12, 2015, Helen Irene Kelley, age 90, was called home to be with the Lord. She will now rest in glory with her husband of 58 years, William Kelley Sr who went home March 8, 2013. Helen was one of three children to late Russel and Flodia Spicer Hosey. She has been preceded in death by an infant sister and a younger brother, Delbert Gene Hosey who passed in 2013. Born October 14, 1924 in Copen, WV, she later married and moved to Burnsville, WV. Helen is survived by her four children, Roberta Riffle, Diana Lindsay who both reside in Florida, William “Bill” Kelley Jr. wife Terry of Grafton, WV, and Cindy Groves husband Gary of New York. God blessed Helen with 8 grandchildren and 11 great-grandchildren, all of which she loved dearly. One of her favorite past times was holding, rocking, and loving grand babies. Some of her best smiles were captured while holding and delighting in little ones. Helen was a hard worker and did her part during WWII by joining the other Rosy the Riveters in the Good year factory. She later worked for a cabinet factory in Sutton, WV. The Mountainlair in Morgantown, WV was a place of later employment that she enjoyed for a number of years. Ruby Hospital in Morgantown was her last place of employment as a cashier. She considered her positions more than just a job and loved the people. God blessed Helen with the gift of being a social butterfly and a desire to help in her own ways. Most times, she could contribute some past story to the conversation that would make you laugh. Her last year of life was spent using her God given gifts bringing joy to those who lived in the Heritage of Morgantown. Over the years, she also showed love by cooking and feeding her family. Helen was known for her home grown canned green beans at every family function and made a killer chili dog sauce that no one will ever duplicate. As long as she was able, Helen was a member and served our Lord at Rock Cave Baptist church in Rock Cave, WV. Pastor Jessie noted that both Bill and Helen were faithful members, always giving of themselves. Helen spent a number of years taking care of refreshments for vacation bible school. They always helped where needed; “they were like family,” shared Pastor Jessie. Friends will be received at the Heavner and Cutright Funeral Chapel on Saturday, July 18, 2015, from 9-11:00 AM, the funeral hour, with Pastor David Jessie officiating. Interment will follow in the Weston Masonic Cemetery.

After a prolonged sickness on July 12, 2015, Helen Irene Kelley, age 90, was called home to be with the Lord. She will now rest in glory with her husband of 58 years, William Kelley Sr who went home March 8, 2013. Helen was one of three children... View Obituary & Service Information

The family of Helen Irene Kelley created this Life Tributes page to make it easy to share your memories.