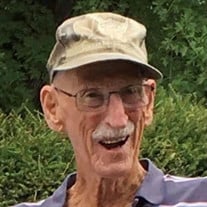 Hayward D. “Has” Lewis, age 92, of the Bailey Ridge community, died Thursday, March 25, 2021, at his home. He was born on March 15, 1929, at Cutright Chapel, WV, a son of the late Joseph Edward and Nola Cutright Lewis. On March 14, 1951, he was united in marriage to Retha Avanella Barbara Marcella Manley Lewis, who preceded him in death on April 13, 2010. In addition to his parents and wife, he was also preceded in death by one sister Irene Wagoner and three brothers: Stan, Ped, and Don Lewis. He is survived by two sons: Gail Lewis and Lenny Lewis and wife Robin, both of Bailey Ridge; two daughters: Kay and husband Steven L. Phillips and Tammy and husband Brian Cox, both of Bailey Ridge; seven grandchildren; three great grandchildren; one sister Imogene Lewis of Buckhannon; many nieces and nephews; and his beloved cat, Nuisance. Has was a retired coal miner, an avid hunter and fisherman, and loved to collect and trade pocket knives. The family will receive friends on Monday, March 29, 2021, from 5-8:00 PM, at the Heavner & Cutright Funeral Chapel. A funeral will be held on Tuesday, March 30, 2021, at 10:00 AM, at the funeral chapel, with Pastors Tim and Chad Lewis officiating. Interment will follow in the Bailey Cemetery, where the Upshur County Honor Guard will conduct graveside rites.

The family of Hayward D. "Has" Lewis created this Life Tributes page to make it easy to share your memories.

Send flowers to the Lewis family.