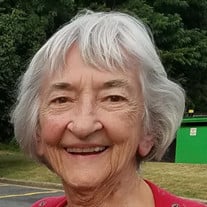 Geraldine A. “Gerry” Gjolberg, age 89, of Williamsburg, VA, died Sunday, October 6, 2019, at St. Joseph’s Hospital in Buckhannon. She was born August 20, 1930, in Gloucester, VA, daughter of the late Cornelius A. and Henrietta Vanderhoden Lemmers. She met Ivar Henry Gjolberg in Germany and on June 19, 1962, they were united in marriage in Basle, Switzerland. In addition to her husband, she is also survived by her son, Ivar “Skip” Henry Gjolberg, Jr. and wife, Donna, of Buckhannon, WV; five grandchildren - Kyle Gjolberg and wife, Monica; Casey Gjolberg and fiancée, Jordan; Mercy and husband, John Sullivan; Hannah Gjolberg; and Maria Gjolberg; one brother Adrian Lemmers, and wife, Kathleen, of Arlington, VA; nieces; and nephews. Gerry attended St. Olaf Catholic Church in Williamsburg. She was a talented artist, who enjoyed painting and drawing. In her younger years, she often could be found fishing, crabbing, and raking oysters in the Chesapeake Bay area. With an adventurous spirit, she traveled across the world during her young adult years and later with her husband. She will be long remembered as a loving wife, devoted mother, doting grandmother, and especially as her son’s biggest fan. In accordance with her wishes, her body will be cremated and a private memorial Mass will be held at a later date.

The family of Geraldine A. "Gerry" Gjolberg created this Life Tributes page to make it easy to share your memories.

Send flowers to the Gjolberg family.