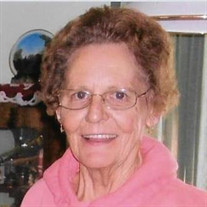 Garnett Mary Walton, age 67, of Rock Cave, died Wednesday, August 12, 2015, at her home. She was born on June 4, 1948, in Kanawha Head, WV, a daughter of the late Guy and Jessie Bell Gaunt Roby. On September 27, 1969, she was united in marriage to Kenneth Lee Walton, who survives. Also surviving are one son Willard Lee Walton and wife Melissa of Rock Cave; one granddaughter Rhanda Shaun Walton of Buckhannon; one grandson Benjamin Arden Walton of Rock Cave; three sisters: Iris Mick of Rock Cave, Eleanor Lewis of Amherst, OH, and Darlene Thompson and husband Doug of Mansfield, OH; two brothers: Alfred Robey and wife Liz of Buckhannon and Glenn Roby and wife Candy of Mansfield; two brothers-in-law: Harry Walton and wife Donna of Iowa and Garry Walton and wife Joanie of Kanawha Head; three sisters-in-law: Julia Bancalari of Kanawha Head, Marlene Elmore and husband Joe of Rock Cave, and Joyce Haymond and husband Jerry of Rock Cave; a special niece, Lisa Williams, who helped care for her; and several other nieces and nephews. In addition to her parents, she was preceded in death by five brothers: Cecil Gaunt and Jimmy, Bobby, Harry, and William Roby; and her father- and mother-in-law Willard and Merle Walton. Garnett was a homemaker; she loved to cook and dearly loved her family. She was a valued employee at the Arlington Mini-Mart for seven years. At the request of the deceased, the body will be cremated and no services will be held. Private family interment will be held in the Lee Cemetery at Kanawha Head. In lieu of flowers, donations may be made to St. Joseph’s Hospice.

The family of Garnett Mary Walton created this Life Tributes page to make it easy to share your memories.

Send flowers to the Walton family.