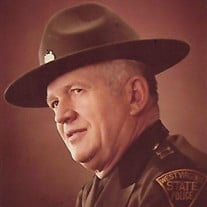 French W. Armstrong, age 94, of the Waterloo Road, French Creek, died Monday, October 19, 2020, at his home. He was born May 13, 1926, at Cow Run, a son of the late Willie French and Jesse Waugh Armstrong. On April 9, 1955, he was united in marriage to Lois Virginia Knepp Armstrong, who preceded him in death on March 6, 2020. In addition to his parents and wife, he was also preceded in death by one son, Thomas Mark Armstrong; one grandson, Mark Anthony Galeazzi; two sisters: Rosalee Hedrick and Louise Morris; and three brothers: Robert, Edward, and Alan Armstrong. He is survived by one daughter Rebecca Ann Galeazzi of French Creek; one son John Lee Armstrong of Elkview; and three grandchildren: Alexandra, Stephanie, and Hunter Armstrong. Mr. Armstrong was a veteran of the US Army and upon his honorable discharge, he enrolled in the WV State Police Academy, followed by a career in the WV State Police that spanned from 1948-1981, when he retired with the rank of Captain. He then pursued a career in real estate as an owner of Armstrong-Davis Realty and cultivated his noted Christmas Tree Farm in French Creek. His devotion to civic organizations was boundless as evidenced by the numerous groups which benefited from his active participation: Buckhannon-Upshur Chamber of Commerce, Upshur County Development Authority, Southern Upshur Business Association, Central Upshur Lions Club, Upshur County Farm Bureau (Board of Directors), WV Forestry Stewardship Program, WV and National Tree Growers Associations, and the WV State Police Retired Members Association. He was also a member of the First Presbyterian Church in Buckhannon, a 32nd degree Mason and member of the Rock Cave Lodge #81 A.F. & A.M., the Rock Cave Aletha Chapter #82 Order of the Eastern Star, and had served a six-year term as an Upshur County Commissioner. The family will receive friends on Friday, October 23, 2020, from 5-7:00 PM, at the Heavner & Cutright Funeral Chapel. A graveside service will be held on Saturday, October 24, 2020, at 1:00 PM, at the French Creek Memorial Gardens, where the Rock Cave Masonic Lodge #81 will conduct graveside rites. In lieu of flowers, donations may be made to Central Upshur Lions Club, SUBA, WV State Police Retired Members Association, Frenchton Bobcats 4-H Club, Upshur County Farm Bureau, First Presbyterian Church, Rock Cave Masonic Lodge #81, Rock Cave Order of the Eastern Star #82, or the charity of your choice.

The family of French W. Armstrong created this Life Tributes page to make it easy to share your memories.

Send flowers to the Armstrong family.