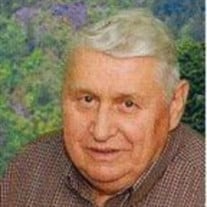 Frederick Dixon Law, age 85, of the Straight Fork Community, Crawford, died Monday, July 5, 2021, at Holbrook Healthcare Center in Buckhannon. He was born on December 23, 1935, in Weston, a son of the late Fred Dixon and Clara Galford Law. On August 5, 1961, he was united in marriage to Norma Lou Wimer Law, who preceded him in death on January 9, 2013. He is survived by one daughter Debra and husband Matthew McCabe of Maidsville, WV; two sons: Marcus Law and wife Terry of Chapel Hill, NC and Kevin Law and wife Rachel of Point Pleasant, WV; four grandchildren: Eric Joseph Law, Emily Lou McCabe, Greyson Thomas Law, and Elliott Grace Law. Mr. Law graduated from Walkersville High School with the Class of 1953, then received a B.S. degree from WVU in Agricultural Education and a M.S. degree from WVU in Horticulture. Later he received his administrative certificate. Dixon started his education career as a teacher at Sand Fork High School. He later went to work for the state by providing training to teachers. In 1971 he went to Ritchie County where he became a supervisor and Assistant Superintendent of Schools. In 1977 he became the Superintendent of Ritchie County Schools, a position he held until his retirement in 1989. Following retirement to the family farm, Dixon spent countless hours farming, gardening, and serving the community. He was a member of the Straight Fork United Methodist Church, where he was a Sunday school teacher, church treasurer and church trustee. He also was treasurer and trustee of the Wimer and Fair Haven Cemeteries. Dixon was an active member and officer of Central Upshur Lions Club where he received several awards for his service. He was president of the Lowe Bartlett Armstrong Trust for sight impairment. Dixon was a former district supervisor for the West Fork Soil Conservation, former board president of the Tri-County Health Clinic, member of the farm bureau and the Straight Fork CEOS club. He was also a 50-year member of the William G Bennett Lodge 46. The family will receive friends on Saturday, July 10, 2021, from 3-6:00 PM, at the Heavner & Cutright Funeral Chapel. On Sunday, July 11, 2021, the body will be moved to the Straight Fork United Methodist Church and lie-in-state from 2-3:00 PM. A funeral service will be held at 3:00 PM, with the Rev. Kevin Bender and the Rev. Dr. Ken Ramsey officiating. Interment will follow in the Wimer Cemetery at Straight Fork.

The family of Frederick Dixon Law created this Life Tributes page to make it easy to share your memories.

Send flowers to the Law family.