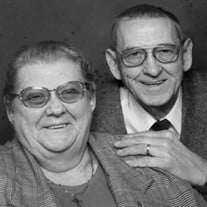 Freddie W. Kasten, age 87, formerly of Buckhannon, went to be with our Lord on Monday, April 20, 2020, at the West Virginia Veterans Nursing Facility in Clarksburg, where he had been a resident for six years. He was born in Buckhannon on July 31, 1932, a son of the late Otto F. and Lurettia E. Watson Kasten. On March 12, 1955, he was united in marriage to Dolores Dawn Ogden Kasten, who preceded him in death on March 21, 2012. In addition to his parents and wife, he was also preceded in death by two grandsons: Joey Leigh and DJ Kasten; one great grandson TJ McDaniel; three sisters: Marcella Dalton, Vera Wentz, and Roberta Wilfong; and angel babies he didn’t meet here but that he’s loving now. He is survived by three daughters: Kathy and husband Dave Leigh of Buckhannon, Margy and husband Donovan Grenz of Thornton, WV, and Ann Kasten of Buckhannon; one son Danny Kasten and wife Colleen of Buckhannon; six grandchildren: Davey, Chris, Jason, and Jenny Leigh, Sandy McGinn, and Stephanie McDaniel; twelve great grandchildren: Katina and husband Andrew, Presley, Trey, Regan, Kadie, Gracie, Gavin, Cassidy, Addison, Cailey, Lexi, and Eden; and three great-great grandchildren: Kaden, Kierstyn, and Kolton. Freddie was a graduate of Buckhannon-Upshur High School. After graduation, he attended a TV repair school, then went on to serve in the US Army from February 1953 – February 1955, part of which was during the Korean War. He was a “jack-of-all-trades”—including carpentry, plumbing, and electrical work. Mr. Kasten was also an accomplished businessman; together with his wife Dolores, they owned and operated Kasten’s Bargain Center, Dolores’ Diner, and Dolores’ Riviera Restaurant. A faithful Christian, Freddie was a member of the Kanawha Run Church, where he served as Superintendent for many years. He loved to worship and sing with his wife for church revivals and the TV program, “Wings of Faith”. A private graveside service will be held at the Upshur County Memorial Park with Rev. Kara Phillippi officiating and the Upshur County Honor Guard conducting military rites. In lieu of flowers, donations may be made to the Kanawha Run Church, care of Herbert McClain, 3212 Frenchton Road, French Creek, WV 26218.

Freddie W. Kasten, age 87, formerly of Buckhannon, went to be with our Lord on Monday, April 20, 2020, at the West Virginia Veterans Nursing Facility in Clarksburg, where he had been a resident for six years. He was born in Buckhannon on July... View Obituary & Service Information

The family of Freddie W. Kasten created this Life Tributes page to make it easy to share your memories.

Freddie W. Kasten, age 87, formerly of Buckhannon, went to be...

Send flowers to the Kasten family.