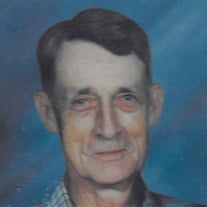 Floyd V. Cutright, age 91, of the Lee Glass Road, Tallmansville, departed this life on Sunday, December 31, 2017, at St. Joseph’s Hospital in Buckhannon. He was born on December 8, 1926, at Czar, WV, a son of the late Abraham L. and Myrtle Snyder Cutright. On March 3, 1954, he was united in marriage to Rose Anne Shreve Cutright who survives. Also surviving are four daughters: Katha Bond, Lucille Cutright, Ione and husband David Bender, and Jean and husband Terry Peggs; one son Mark Cutright; two sisters: Hazel Kelley and Frances McKinney; six grandchildren and several step grandchildren; and a special friend Judy Davidson. In addition to his parents, he was also preceded in death by four siblings: Pauline Kelley, Grace Conrad, Gladys Cutright, and an infant brother. Floyd was a graduate of Pickens High School and was a member of the Tallmansville Baptist Church, a former member of the Washington District Volunteer Fire Department, and had been an active coon and bear hunter. He had worked in the coal and timber industries, and was later employed by Shannon’s Hardware, before retiring as a custodian at Buckhannon-Upshur High School. He was a devoted husband and father and was loved dearly by his wife and family, and will long be remember as a friend to everyone he met. The family will receive friends on Wednesday, January 3, 2018, from 2-6:00 PM, at the Heavner and Cutright Funeral Chapel. The funeral will be held on Thursday, January 4, 2018, at 1:00 PM, at the funeral chapel. Private interment will follow in the Tallmansville Baptist Cemetery.

The family of Floyd V. Cutright created this Life Tributes page to make it easy to share your memories.

Send flowers to the Cutright family.