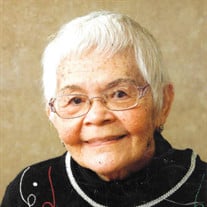 Emma Ortigoza Mallorca died peacefully in her sleep at the age of 95 years old on November 29, 2020 in French Creek, West Virginia. Although she lived in Guam for many years, she lived in West Virginia with her sister Georgia Cutright, her husband Orville, and their family since 2012. Emma was the eldest of nine children Fernando P. and Beatriz Ortigoza. She was born on September 6, 1925. She is survived by her brother Raoul Ortigoza (Pennsylvania, U.S.A), Sisters Minna “Goldie” Tupas (Barotac, Viejo, Iloilo, Philippines), Josephine Moreno (Iloilo City, Philippines), Georgia Cutright (7560 Alton Rd., French Creek, W.V., 26218) and numerous nieces, nephews, and their children. She is preceded in death by her two brothers: Fernando Ortigoza of Cagayan de Oro, Philippines, Corpus Ortigoza, Houston, Texas and two sisters: Salud Javier of Iloilo City, Philippines, and Lillian Punsalan, Roxas, Philippines. She married Noberto “Bert” Mallorca on February 14, 1970 and lived on the island of Guam until his death, at which time Emma decided to return to live with her sisters in the Philippines. She earned her Master of Arts in Elementary Education from Fresno State College in 1965: and her Bachelor of Science in Education and Elementary Teacher’s Certificate in 1952, Valedictorian from Central Philippine College (now University) in 1948. In the University, she served as a part time faculty member at the Mathematics Department, Clerk and Reader at the School of Graduate Studies 1962-1963, Executive Secretary of the Graduate School in 1958. She taught full time at the College of Education in 1966-1971. Before joining the Central Philippine University (C.P.U), she was a teacher at Gil Lopez Elementary School 1945-1946, St. Aloysius School in 1948-1956 and the acting principal in 1950-1952, Critic Teacher at the Philippines Women’s University, Iloilo City in 1956-1959, at Silliman University from 1959-1960, and a teacher at the Missionary School for American Children inside the C.P.U in 1960-1962. In Guam, she taught Mathematics and English at Mt. Carmel in 1972-1975, Algebra and Geometry at Oceanview Senior High, and mathematics at Agueda Johnston Junior High, and at Dededo Junior High in 1975 until her retirement in 1994. She will be remembered by friends and family for her love and unselfish generosity. Her passion for education forwarded many of her siblings, nieces, nephews and other family members to pursue higher education. After her move to West Virginia, she and her sister Georgia had many discussions about eternity and where she would reside. Emma reassured and affirmed that she was looking forward to the grand reunion in heaven one day. Although she traveled and was apart of many churches, she always considered herself as a member of the Central Philippine University Baptist Church. In the morning, after her passing Georgia, Orville, Emmy (daughter) David (son in law) and grandchildren: Adelaide, Jenevieve, Vivienne, and Everett gathered around Emma one last time and sang songs of worship and recited the Lord’s Prayer as a private send off before the paramedics arrived and ushered her body away. The memorial service for Emma will be announced at a later date.

Emma Ortigoza Mallorca died peacefully in her sleep at the age of 95 years old on November 29, 2020 in French Creek, West Virginia. Although she lived in Guam for many years, she lived in West Virginia with her sister Georgia Cutright, her husband... View Obituary & Service Information

The family of Emma Ortigoza Mallorca created this Life Tributes page to make it easy to share your memories.

Emma Ortigoza Mallorca died peacefully in her sleep at the age...

Send flowers to the Mallorca family.