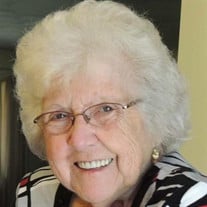 Ellen “Jayne” Anderson, age 81, of Rock Cave, died Sunday, October 8, 2017, at her home surrounded by her loving family and under the care of West Virginia Hospice. She was born on December 14, 1935, in Canaan, WV, a daughter of the late Clinton Rice and Della Friend Rice Sines. She was united in marriage on April 28, 1956, to her husband of 61 years, Hunter R. Anderson, who survives. In addition to her husband, she is also survived by two daughters: Carla and husband Bill Sigsworth of North Ridgeville, OH and Annette and husband Jason Hyre of Rock Cave; one grandson Luke Hyre of Rock Cave; two brothers: Artie and wife Jessie Rice of Rock Cave and Richard and wife Susan Rice of St. Albans, WV; one sister Wilma Lea Pringle of Clay, WV; and several nieces and nephews. She was preceded in death by one sister Carol Burnside and her beloved dog Coco. Mrs. Anderson, along with her husband, owned and operated Anderson’s Restaurant in Rock Cave for 17 years, and was an active community member volunteering with Fidler’s Mill, Upshur County Fair, and was a charter member of the Southern Upshur Business Association. She also served on the Tri-County Health Clinic Board. Jayne enjoyed family, roses, and playing bingo, and she attended Good Hope Tabernacle. The family will receive friends at the Good Hope Tabernacle on Wednesday, October 11, 2017, from 11:30 AM-1:00 PM, the funeral hour, with Pastor Holly J. Hoover officiating. Interment will follow in the Canaan Cemetery. In lieu of flowers, donations may be made to West Virginia Hospice, 6 Hartman Plaza, Buckhannon, WV 26201.

The family of Ellen "Jayne" Anderson created this Life Tributes page to make it easy to share your memories.

Send flowers to the Anderson family.