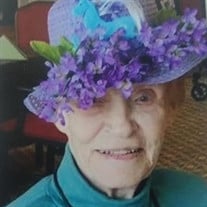 Elizabeth (Libbie, Libby) Farinash Lorraine passed away on Saturday, March 9, 2019, in Lexington, KY just a few months shy of her 100th birthday. She was born October 31, 1919, in Norton, WV to the late James Sterling and Bertha Chipps Farinash. In addition to her parents, she was also preceded in death by three siblings: Alfred, Leonard, and Juanita; and her husband Charles Kemper Lorraine. She had married twice previously and both are deceased. She is survived by two sons: Joe (Kathy) Dunn of Hastings, MI and Tom (Charlene) Dunn of Versailles, KY; four stepchildren: Catherine (Hank Willner) Lorraine of Bethesda, MD, Beth (George) Brady of Richmond, VA, Kemper (Renee) Lorraine of Alexandria, VA, and Martha (James) Wallace of Richmond, VA; and multiple grandchildren, nieces, nephews and cousins. Due to macular degeneration, her telephone became her lifeline and she lived for calls from relatives, friends, and acquaintances. She was raised in Fairmont, WV. After high school, she attended business school in Bowling Green, KY and thus began her career in secretarial and office administrative positions for the majority of her working career. After the birth of her sons and subsequent divorce, she moved to Washington, D.C. around 1951 and eventually began working for various congressmen, initially at the US Capitol and then beginning in the late 1960s at various district offices, mostly in Virginia. After a brief stint with Senator Tribble’s district office in Richmond, VA, she retired from Federal civil service in 1984. Following her retirement, she assisted her husband Kemper with the running of his hardware store in the Richmond, VA area. Also in the late 60s and early 70s she became a co-owner of a Shakey’s Pizza franchise. In the mid 90’s she and her husband, Kemper, moved to southwest Florida. After the passing of Kemper in 2015, she moved to the Lexington area to be near her son Tom. She resided in assisted living facilities and remained fairly independent until the last three weeks. Due to declining health, multiple relatives from Virginia, West Virginia, and Tennessee had paid visits to her over last few months. An annual Farinash/Forinash reunion is held in Ireland, WV; she attended many of those events over her lifetime, attending the last four even though her health made it difficult. She also attended multiple Chipps reunions in WV. A graveside service will be held at 10:30 AM, on Saturday, March 16, 2019, at McCutcheon Chapel Cemetery, where she will be interred beside her parents. The Rev. Robert F. Heavner will officiate. In lieu of flowers, donations may be made to the McCutcheon Chapel Cemetery Association, c/o Carmen Ratliff, 3907 Glady Creek Rd, Ireland WV 26376.

The family of Elizabeth (Libbie, Libby) Farinash Lorraine created this Life Tributes page to make it easy to share your memories.

Send flowers to the Lorraine family.