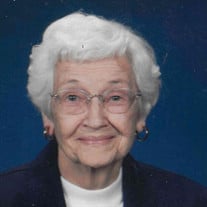 Dorothy Marie Kelly Tenney, age 97, of Buckhannon, departed this life Thursday, November 30, 2017, in Elkins Rehabilitation and Care Center in Elkins, under the care of Mountain Hospice. She was born January 25, 1920 at Galloway, Barbour County, daughter of the late George Russell Kelly, Sr. and Pearl Shaw Kelly. On October 12, 1940 she was married to Requa S. Tenney, who preceded her in death January 20, 2010. Surviving is a daughter, Marsha Ann Teter and husband James K. Teter of Valley Bend, WV and a grandson Bryan E. Hunter of Boyds, Maryland. Also surviving are a sister Mary Ellen Rowan of Buckhannon, WV and a brother Walter Edward Kelly of Lansdale, PA, a sister-in-law Jean Kelly of Buckhannon, along with numerous nieces and nephews. Preceding her in death were three brothers, George Russell Kelly, James Donald Kelly and John Berkly Kelly, and one sister Elizabeth (Betty) Blades, and a grandson Matthew G. Hunter. Dorothy was a seamstress and a member of the First Baptist Church of Buckhannon. The family will receive friends Monday December 4, 2017 at Heavner and Cutright Funeral Chapel in Buckhannon from 12:00 noon to 1:00 PM the funeral hour with Rev. Dr. Basil Hensley Officiating. Interment will follow in Buckhannon Memorial Park. In lieu of flowers contributions may be made to the First Baptist Church of Buckhannon.

The family of Dorothy Marie Tenney created this Life Tributes page to make it easy to share your memories.