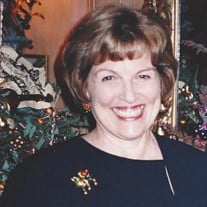 Dorothy Louise Tenney Jones “Dotty” left this life unexpectedly, yet peacefully at home in Vienna, VA, on September 16, 2019. She was the beloved wife of 63 years to John M. Jones, the devoted mother of Nancy (and her husband, Ken Schroeder), Stephen (and his wife, Beth Niedbala), and Susan (and her husband, Steven Field), and the cherished grandmother of eight grandchildren: Matthew and Ryan Schroeder, Danielle and Gregory Jones, and Justin, Nicholas, Natalie, and Julia Field - all of whom meant the world to her. Dotty was born in Clarksburg, WV to Osa and Harvey Tenney on February 25, 1938. Her only sibling, Ronnie, was born the following year. Her family moved to Adrian, WV where her parents were elementary and middle school teachers. Her childhood was filled with the love of her immediate and extended family, many of whom lived nearby. Dotty was an active member of 4-H, the Methodist Youth Fellowship of the Adrian Methodist Church, festival princess pageants, and drum majorette in the high school marching band. Her Sunday School teacher introduced her to the love of her life, John M. Jones, when he was home on leave from the Navy. She graduated from Buckhannon-Upshur High School in 1956, and married John shortly thereafter to begin her lifelong adventure with him in Washington, D.C. She worked as a secretary at the Department of Justice in Washington, D.C. until her first child was born. She dedicated herself to her growing family and supporting John’s career in the FBI with job relocations to New York, New Jersey, and Virginia. Dotty was active as a volunteer in numerous capacities including fundraising and leadership with the Girl Scouts, Boy Scouts, Little League, PTA, swim, dance, baton, and band organizations. She fully participated in these roles, and her children have many fond memories of her involvement. In 1970, the family moved to Lakevale in Vienna, VA and quickly became one of the founding families for the building of the Church of the Good Shepherd United Methodist Church on Hunter Mill Road, where she was active with the United Methodist Women for many years. Dotty was also active in the Lakevale Garden Club and neighborhood bowling league. Dotty and John hosted many parties and celebrations over the years, and Dotty’s laughter was always contagious. After her children were grown, Dotty continued her volunteering with Meals on Wheels in Fairfax County, VA and was recognized for twenty years of service. She continued her caregiving role with the relocation of her mother to live with Dotty and John, after her father’s death. She enjoyed their close relationship and felt it was her honor to care for her mother. Dotty’s passions included avid reading and extensive travel with family and friends. She was always packed and ready for a trip at the mention of the word “go”. She loved the adventure and spontaneity of the unexpected – whether it was riding an elephant in Asia or a camel in Australia. She traveled extensively in numerous states, countries, and island nations on four continents. Dotty was a successful distributor and sales representative for the Rose Marie Collection of skin care products for thirty years, and earned many awards and accolades. She never met a stranger, and most of her colleagues and customers became good friends. Dotty was preceded in death by her parents, Osa and Harvey E. Tenney, as well as her brother, Ronald A. Tenney and John’s brother, William Maurice Jones. Left to cherish her memory is her loving husband, John; her children and their spouses, and her grandchildren; sister-in-laws, Patty Tenney and Mary Lou Jones; nieces Cheryl Tenney Harpold, Rebecca Sue Tenney, and Deborah Jones Maddy, numerous cousins, and many friends. Visitation will be held on Thursday, September 26, from 6 to 8 p.m. at Money & King Funeral Home, 171 West Maple Ave in Vienna, VA. Services will be held on Saturday, September 28, at 2 p.m. at Hampton United Methodist Church, Hampton Road, Buckhannon, WV, followed by graveside at the Hampton Cemetery. Flowers can be received at Money & King Funeral Home in Vienna, VA or Heavner & Cutright Funeral Chapel in Buckhannon, WV. In lieu of flowers, donations may be made to the Hampton Cemetery, in care of Huelin Linger, 680 Stony Run Road in Buckhannon, WV 26201.

Dorothy Louise Tenney Jones &#8220;Dotty&#8221; left this life unexpectedly, yet peacefully at home in Vienna, VA, on September 16, 2019. She was the beloved wife of 63 years to John M. Jones, the devoted mother of Nancy (and her husband,... View Obituary & Service Information

The family of Dorothy Louise "Dotty" Tenney Jones created this Life Tributes page to make it easy to share your memories.

Send flowers to the Jones family.