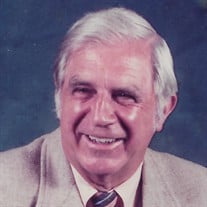 Dennis Crites, Jr., age 85, of Buckhannon, died Tuesday, May 14, 2019, at the J.W. Ruby Memorial Hospital in Morgantown. He was born August 17, 1933, in Adrian, WV, a son of the late Dennis Samuel and Opal Haymond Crites. On April 7, 1955, he was united in marriage to Joyce Louise Cutright Crites, who preceded him in death on January 11, 2004. He is survived by one daughter Kelley and husband Dale Currence of Buckhannon; two sons: Kevin R. Crites and wife Veronica and Roger Kirk Crites and wife Kathy, both of Buckhannon; four grandchildren: Jeremy Crites and wife Amy, Jenna and husband Jason Kelley, Joshua Zickefoose, and Madison Currence; three great grandchildren: Lucy and Lillian Kelley and Payton Zickefoose, and another on the way in November; one sister Betty Jean Allman; and several nieces and nephews. Dennis was employed by Equitable Life Insurance for 38 years. He was a veteran of the U.S. Marine Corps, having served during the Korean War, and was a lifetime member of the VFW and American Legion and assisted the Honor Guard with many military funeral services. He was a member of the Sand Run Baptist Church, the Kesling Mill Lions Club, the Buckhannon Moose Lodge, and was an active recruit for Boys State. Those who knew Dennis will fondly remember him as an avid fan of the Pittsburgh Pirates and WVU Mountaineers. He was a wonderful husband, father, and grandfather, and will be dearly missed by his family, friends, and community. The family will receive friends on Thursday, May 16, 2019, from 4-7:00 PM, at the Heavner and Cutright Funeral Chapel. The funeral will be held on Friday, May 17, 2019, at 11:00 AM, at the funeral chapel, with Rev. Donald Butcher officiating. Interment will follow in the Heavner Cemetery, where the Upshur County Honor Guard will conduct military honors.

The family of Dennis Crites Jr. created this Life Tributes page to make it easy to share your memories.

Send flowers to the Crites family.