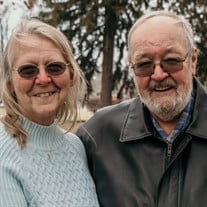 David Lynn Leigh, age 68, of Buckhannon, went to be with our Lord on Monday, January 4, 2021, at his home surrounded by his family. He was born in Buckhannon on January 14, 1952, a son of the late Rollive “Ted” and Luvene Leigh. David was also preceded in death by one son, Joseph Michael Leigh. David married his soulmate, Kathleen Dolores Kasten Leigh on December 2, 1972, who survives him. David is also survived by three sons: David II and fiancée Kari of Buckhannon, Christopher and wife Tiffany of Buckhannon, and Jason and wife Mandy of French Creek; and one daughter Jennifer of Buckhannon; 9 grandchildren: Katina and husband Andrew, Presley and fiancé Dylan, Trey, Regan, Kadie Jo, Cassidy, Addison, Cailey, and Eden; and 3 great-grandchildren: Kaden, Kierstyn, and Kolton. David is also survived by 5 brothers: Gary and wife Cora of Buckhannon, Bill and wife Liz of Delaware, Terry and wife Brenda of North Carolina, Mark and wife Bekki of Buckhannon, Tim and wife Tracy of Alaska; and one sister Roberta and husband Jon of Virginia; and several beloved nieces and nephews. David graduated from Buckhannon-Upshur High School in 1969. He served honorably in the United States Army from 1970-72, during which he was deployed to Vietnam. David was awarded the Army Commendation Medal in May of 1971. In 1973, he served in the Army National Guard for one year. David retired from what was originally the Clow Corporation, where they manufactured plastic pipe for many years. As a faithful Christian, Dave was a beloved member of the Kanawha Run Church where he was a shining example of the Lord’s love and light. He was an avid hunter, and most enjoyed spending time outdoors with his sons and brothers, especially at the Leigh Moose Camp in Eureka, AK, or shooting at targets with his daughter and grandkids. Dave also painted Scriptures on river rocks and gifted them to people. Dave was a beloved husband, father, grandfather, brother, uncle, and friend, that leaves a lasting legacy of faith and family above all else. He was never happier than when he was surrounded by all his family, and the love and laughter that would ensue. Friends will be received on Thursday, January 7, 2021, from 5-7:00 PM, at the Heavner and Cutright Funeral Chapel. Private family funeral services will be held with Rev. Kara Phillippi officiating and interment will be in the Heavner Cemetery with the Upshur County Honor Guard conducting military honors at the graveside.

The family of David Lynn Leigh created this Life Tributes page to make it easy to share your memories.

Send flowers to the Leigh family.