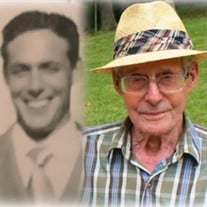 Conrad Ernest Baston, 91, of Saint Albans and French Creek, peacefully departed this life into his eternal home in Heaven to be with his Lord and Savior on Tuesday morning, November 26, 2019, at the Charleston Area Medical Center in Charleston, WV. He had been in declining health for a few years. Conrad was born on August 16, 1928, in Akron, Ohio, a son of the late Ernest Samuel and Lucy Katherine Kinley Baston. Also preceding him in death are two brothers, Richard Dale Baston of Dry Ridge, KY, and Phillip Ambrose Baston of Greentown, OH. On March 7, 1948, Conrad was united in marriage in Milwaukee, Wisconsin, to the love of his life, Lugene Kern Baston, who survives and currently living in Saint Albans with their daughters and son-in-law. In addition to his wife, Conrad is survived by one son, Conrad Donald, and wife, Shelley, of Big Chimney, WV; two daughters, Constance Diane Baston and Lucinda Ann Dougherty, and husband, Martin, of Saint Albans, WV. Also surviving are two grandchildren, Conrad Russell Baston, and wife, Tiffany, of Morgantown, WV, and Heather Michelle Hull, and husband, Roger, of French Creek, WV; great-grandchildren Sydney Diana, Emma Marie, and Conrad Garrett Baston, and Kylie Paige and Roger Brody Hull. Conrad was passionate and proud of all his grandchildren. He was always most joyous being with all his family. Conrad attended East High School in Akron, Ohio. He learned early the meaning of a strong work ethic. He worked at a bowling alley setting pins after school. He also worked at Goodyear Tire building tires. He worked in his father’s produce market in Tallmadge, Ohio, when he was in his early teens while in school. Later, he was issued a driver’s license at the age of fifteen to begin driving a commercial truck with his father and Uncle Ted to Florida and other southeast states to purchase and load fruits and vegetables for the produce market. Conrad left high school early to work in war production during World War II stamping aircraft parts. This led Conrad to a long career of long-distance tractor trailer driving. He began as an owner-operator hauling Studebaker cars out of South Bend, Indiana, and hauling brick for Ernie Gable Trucking in Akron, OH. He also drove and hauled freight for various companies, Allstates Freight Lines, Bender and Loudin Trucking, City Products Corporation, James River Trucking, and Triton Transport. During his driving career, he hauled freight in all forty-eight contiguous states. He was a member of the Teamsters Union. Conrad also worked in the coal industry for three years. During his entire working career, he worked in various occupations until he suffered a work-related injury which prohibited him from continuing any occupation. When Conrad was growing up in Tallmadge, Ohio, he also learned carpentry and masonry from his father. With these learned skills he built a home in Edinburg, Ohio, and built another two homes in French Creek, WV, with his son. He was also very talented and loved building. Throughout his life, Conrad always enjoyed farming. As a young boy and early teenager, he enjoyed going to the family farm in Georgetown, KY, during the summers to help with crops and raising chickens. He also enjoyed his farm in French Creek where he and his wife operated a small dairy business for a few years, raised chickens and raised vegetable gardens and strawberries. Conrad also enjoyed hunting, fishing, and traveling. Conrad was a member of the Christian Fellowship Church in Buckhannon, WV., a member and avid supporter for Right to Life to save the unborn, and member of the National Rifle Association. Friends will be received at the Heavner and Cutright Funeral Chapel on Sunday, December 1, 2019, from 1-2 PM the funeral hour with Pastor Ed McDaniels officiating. Private family graveside services will follow. In lieu of flowers, Conrad’s wish would be to make donations to any Right to Life organization

Conrad Ernest Baston, 91, of Saint Albans and French Creek, peacefully departed this life into his eternal home in Heaven to be with his Lord and Savior on Tuesday morning, November 26, 2019, at the Charleston Area Medical Center in Charleston,... View Obituary & Service Information

The family of Conrad Ernest Baston created this Life Tributes page to make it easy to share your memories.

Send flowers to the Baston family.