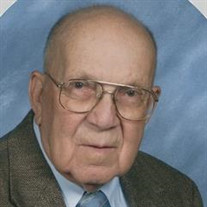 Rev. Charles J. Wilfong, age 85, of Rt. 2, Buckhannon, WV, died Sunday, December 20, 2009, at his home. He was born on January 7, 1924, in Upshur County, a son of the late Charles Everett and Beatrice Lewis Wilfong. He is survived by his wife, Glenna Manley Wilfong; two sons, Burton and wife Sue Wilfong, and Tim Wilfong; and one daughter, Glenda and husband Gary Bailey, all of Buckhannon. In addition to his wife and children, nine grandchildren, eight great-grandchildren, and several nieces and nephews also survive. In addition, three brothers, Glenn Wilfong of Alabama, Frank Wilfong of Buckhannon, and Don Wilfong of Ohio; and one sister Bonnie Hardman of Buckhannon survive as well. He was preceded in death by one brother and two sisters. Rev. Wilfong served as a West Virginia United Methodist Pastor for 27 years, serving many different charges throughout the state. After his retirement Rev. Wilfong attended the Reed Chapel United Methodist Church where he taught the adult Sunday school class and occasionally filled in as pastor. He was a World War II veteran, having served in the U.S. Navy. Friends will be received from 5-8 PM on Tuesday, December 22, 2009, at the Heavner and Cutright Funeral Chapel. The funeral will be held at 10 AM on Wednesday, December 23, 2009, at the Heavner and Cutright Funeral Chapel with the Rev. Dr. Ken Ramsey officiating. Interment will follow in the Bailey Cemetery where the Buckhannon VFW Post #3663, The Frank B. Bartlett Post #7 American Legion, and the DAV Chapters #5 and #36 will conduct military honors.

The family of Rev. Charles J. Wilfong created this Life Tributes page to make it easy to share your memories.

Send flowers to the Wilfong family.