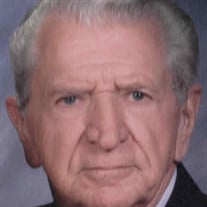 Charles Ray Gooding, Jr., age 85, of the Canaan Road, Rock Cave, went to be with the Lord early Sunday morning, August 30, 2020, at his home. He was born on March 26, 1935, in Benbush, WV, a son of the late Charles Ray Gooding, Sr. and Molly Pauline Royce Gooding. Mr. Gooding served in the US Army and was then employed as an Electronic Technician for the Federal Aviation Administration and retired from there. He was also an avid hunter and fisherman. He was preceded in death by his first wife, Ann Elizabeth Sparks of Timonium, MD, the mother of their two daughters: Jennie Lynne Deephouse and companion Darrin of Allentown, PA and her three children: Casey, Joshua, and Chelsea, and Joyce Simon and husband Mark of Los Angeles, CA. He is survived by his present wife, Carol Ann Haymond Gooding, and her two daughters: Vickie L. Davidson and Tammy Shorter and husband Jeff, and their son Sidney. Also surviving are one sister: Joyce Gooding McCartney and husband Cecil, their son Jason McCartney, their three grandchildren: Brandon, Hannah, and Zachary, and their four great grandchildren; and his niece Molly and husband Mark Abromavage, and their two children: Emma and Ava of Fairfax, VA. He will especially be missed by his three cats: Tom, Powderpuff, and Momma Tiger. At the request of the deceased, the body will be cremated and a memorial service will be held at a later date.

The family of Charles Ray Gooding Jr. created this Life Tributes page to make it easy to share your memories.

Send flowers to the Gooding family.