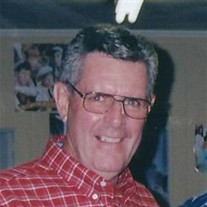 Charles “Bryan” Bennett, age 70, of Buckhannon, died Sunday, June 21, 2015, at the West Virginia Veterans Nursing Facility in Clarksburg, WV. He was born in Upshur County on July 5, 1944, a son of the late Silas W. and Nora M. Gregory Bennett. He is survived by his wife, Karen Carlyle-Bennett. In addition to his wife, he is also survived by one daughter Wilma and husband Tommy Small of Kesling Mill Road; one son Mark and wife Ginger Bennett of Jane Lew; one step-daughter Kristie and husband J.P. Tenney of Buckhannon; one step-son Jeff Carlyle of Buckhannon; three grandchildren: Chris and wife April Small, Rachel and husband Cody Tenney and Jace Bennett; six step grandchildren: Nicholas Lough, Julie and Brandon Tenney, and Kayla, Peyton and Presley Carlyle; and two sister-in-laws: Gay Bennett and Joann Bennett both of Buckhannon. He is also survived by several nieces and nephews and a special former daughter-in-law Julie Harper Bennett. In addition to his parents, he was preceded in death by one son Stephen Bennett and four brothers: Buford, Kessel, Wayne, and Jim Bennett and one sister Wilma B. Reed. Bryan was a 1962 graduate of Buckhannon-Upshur High School and also attended electrical school. He was retired from Moore Business Forms, the Upshur County Board of Education, where he was a school bus driver, and the Upshur County Senior Center. He served in the United States Army from 1962-1965 and the National Guard from 1973-1980. Bryan was a born-again Christian who was a very loving father, grandfather, and husband. He was a constant prayer warrior for his children, grandchildren, and friends. He loved helping friends and neighbors in any way he could. He was a member of the Union Mission Church and attended Good Hope Tabernacle. Friends will be received at the Good Hope Tabernacle Church on Thursday, June 25, 2015 from 3-6 PM. Funeral services will be held on Friday, June 26, 2015 at 10:00 AM at the Good Hope Tabernacle with Pastor Holly J. Hoover and Pastor Dennis Estes officiating. Interment will follow in the Heavner Cemetery. The Upshur County Honor Guard will conduct military honors at the graveside. In lieu of flowers, the family suggests donations be made to the church of your choice. The Bennett family has entrusted the Heavner & Cutright Funeral Chapel with funeral arrangements. Online condolences may be extended to the Bennett family at www.heavnerandcutright.com

The family of Charles "Bryan" Bennett created this Life Tributes page to make it easy to share your memories.

Send flowers to the Bennett family.