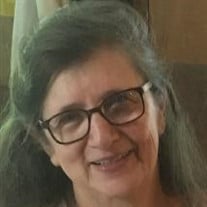 Carolyn Pearl Carpenter, age 72, of Buckhannon gained her angel wings on Monday, March 4, 2019, and is dancing the streets of gold with the Lord. She was born in Upshur County on August 6, 1946, a daughter of the late Russell and Mary May Roth Freeman. She was united in marriage on July 1, 1966, to Bobby Charles Carpenter, who preceded her in death on June 2, 2016. She is survived by three daughters: Kimberly Overton and husband Dennis of Ripley, Carmen Carpenter of Buckhannon, and Shannon Smith of Buckhannon; six sons: Sean Carpenter and Brent Carpenter, both of Holly Grove, Gregory Carpenter at home, David Carpenter and companion Cindy Cook of Buckhannon, Daniel Carpenter and companion Rebekah Simons of Buckhannon, and Todd Carpenter and companion Carrie Ferguson of Buckhannon; seven grandchildren: Brandi Carpenter, Kiona, Tyler, and Nicole Smith, Cayden Carpenter, Aidan McDermott, and Kyser Tyson, all of the home; eight grandchildren: Brittany White and husband Dustin of Ripley, Kelley Endicott and husband Joshua of Yawkey, WV, Christopher Elmer and wife Sandi of Buckhannon, Shayla and Ashley Elmer of Buckhannon, Elijah and Shasta Carpenter of Holly Grove , and Kaleb Simons of Rock Cave; six great grandchildren: Dillon White, Bryce Elmer, Adalynn White, Brenda Endicott, and Saylor and Lillyana Carpenter; and one brother John Freeman and wife Sharon of Selbyville and their son Jonathon and his family. Carolyn was an Apostolic, Jesus Name by faith and a minister of the Gospel of Jesus Christ. She loved her family unconditionally. She ministered to countless souls throughout the years and was a mother to many; her doors were always open to those in need. The family will receive friends at the Heavner and Cutright Funeral Chapel on Friday, March 8, 2019, from 11:00 AM-12:00 Noon, at which time a celebration of life service will be held with Pastor Walter Lee Salmons and Pastor James Gifford officiating. Interment will follow in the Bethlehem Cemetery.

Carolyn Pearl Carpenter, age 72, of Buckhannon gained her angel wings on Monday, March 4, 2019, and is dancing the streets of gold with the Lord. She was born in Upshur County on August 6, 1946, a daughter of the late Russell and Mary May Roth... View Obituary & Service Information

The family of Carolyn Pearl Carpenter created this Life Tributes page to make it easy to share your memories.

Send flowers to the Carpenter family.