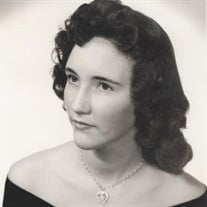 Caroline Deloris Bryant, age 77, of the Alexander Road, French Creek, died Friday, November 9, 2018, at the United Hospital Center in Bridgeport. She was born September 21, 1941, at Czar, WV, a daughter of the late Mirl Elmer Woodson and Mary Arlene Woody Woodson Lee. On August 12, 1962, she was united in marriage to Ray Edgar Bryant who survives. Also surviving are their three daughters: Kathy and husband Andy Yakuboff, Susan and husband Loren Farrar, and Anita Bryant, all of French Creek; three sisters: Wanda and husband Dale Hawkins of French Creek, Carla Harper of Buckhannon, and Tammy and husband Mike Ford of Salem; two brothers: Gene Woodson and wife Christa and Jerry Woodson, both of Sanford, NC; and several nieces and nephews. In addition to her parents, she was also preceded in death by two brothers: Elmer and Albert Woodson, and one brother-in-law Bryan Harper. Deloris was a member of the Kanawha Run United Methodist Church, where she served as a Sunday school teacher and treasurer. She was the President of the Ladies Auxiliary of the Banks District VFD, and was a volunteer at the French Creek Elementary School and past PTO President when her children attended there. She loved to sew, quilt, and cook, and enjoyed caring for her loving family. The family will receive friends at the Heavner and Cutright Funeral Chapel on Monday, November 12, 2018, from 1-3:00 PM, the funeral hour, with the Rev. Mike Ford officiating. Following the funeral service, the body will be cremated. In lieu of flowers, donations may be made in memory of Deloris to the Kanawha Run UMC, c/o Wanda Hawkins, 3770 Alexander Road, French Creek, WV 26218.

The family of Caroline Deloris Bryant created this Life Tributes page to make it easy to share your memories.

Send flowers to the Bryant family.