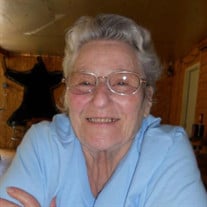 Carol Jean Hayes, age 87, of the Gaines Road, Rock Cave, died Saturday, September 25, 2021, at St. Joseph’s Hospital in Buckhannon. She was born on January 22, 1934, in Frenchton, a daughter of the late Charles William and Felcia Fern Lee Lane. On March 31, 1951, she was united in marriage to James Esley Hayes, Sr., who preceded her in death on October 25, 2010. In addition to her parents and her husband, she was also preceded in death by one son James Esley Hayes, Jr.; one sister and brother-in-law: Meredith and William Evans; two brothers and sisters-in-law: Dayton Lane and Beatrice and Charles Lane and Lucille; and two nieces: Barbara Ours and Shelma Phillips. She is survived by one son Jackie Allen Hayes and partner Agnes Barnett; one daughter Deborah Renee Wilfong and husband David Wayne (Willie); two grandsons: Trenton Drew Hayes and wife Megann Cutlip Hayes and Austin Lee Hayes; one step grandson Zach Crawford; one sister Sheila Lane Kelley and husband James; one brother Dempsey Lane and wife Barbara; two step great grandchildren; multiple nieces and nephews; and two special family friends/daughters: Peggy Lough and Reta Evans. Carol was a Methodist by faith and a member of the Jerry’s Run United Methodist Church and the Salem Ridge United Methodist Church. She received her GED in 1973, and was one of the first licensed female coal miners in the state. She was employed at Hayes Coal Company for 9 years in Jerry’s Run, WV, then with Bethlehem Mine #41 in Barrackville, WV for 9 more years. After leaving the mines, she worked for 10 additional years cleaning houses for friends in the community before her retirement. She was a Senior Companion volunteer in Upshur County for 14 years and her hobbies included quilting and embroidery. Many of her favorite times were spent playing Canasta and Dominoes with her family and friends and she was the reigning Canasta champion at the Hayes Family Reunions. Family was always the center of her life and she was a mother and friend to everyone. A graveside service will be held at 11:00 AM, on Saturday, October 2, 2021, at the Rock Cave Cemetery with Pastor David Jessie officiating. The family requests that those attending the service wear facemasks.

Carol Jean Hayes, age 87, of the Gaines Road, Rock Cave, died Saturday, September 25, 2021, at St. Joseph&#8217;s Hospital in Buckhannon. She was born on January 22, 1934, in Frenchton, a daughter of the late Charles William and Felcia Fern... View Obituary & Service Information

The family of Carol Jean Hayes created this Life Tributes page to make it easy to share your memories.

Send flowers to the Hayes family.