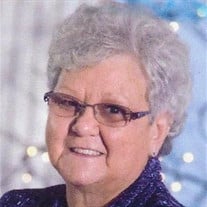 Carol Burnside, age 72, of Rock Cave, died Tuesday, March 29, 2016, at the Charleston Area Medical Center in Kanawha City, WV. She was born on December 18, 1943, in Canaan, WV, a daughter of the late Clinton David Rice and Della Friend Rice Sines. She was united in marriage to Billy D. Burnside, who preceded her in death on June 26, 2013. She is survived by two brothers: Richard Rice and wife Susan of St. Albans and Artie Rice and wife Jessie of Rock Cave; two sisters: Ellen Jayne and husband Hunter Anderson of Rock Cave and Wilma Pringle of Clay, WV; thirty nieces and nephews, of which many at some point called Uncle Bill and Aunt Carol’s home their home; several great nieces and nephews; and many special friends at the Canaan Church. Carol loved her flower gardens, quilting, and was a member of the Canaan Church. The family will receive friends on Friday, April 1, 2016, from 6-8:00 PM, at the Heavner and Cutright Funeral Chapel. The funeral will be held on Saturday, April 2, 2016, at 11:00 AM, at the Canaan Church, with the Rev. Junior Harris officiating. Interment will follow in the Canaan Cemetery. In lieu of flowers, donations may be made to the Canaan Church.

The family of Carol Burnside created this Life Tributes page to make it easy to share your memories.

Send flowers to the Burnside family.