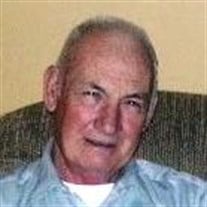 Calvin H. Friend, age 81, of Lorain, OH, died Sunday, July 12, 2015, at the United Hospital Center in Bridgeport. He was born on January 6, 1934, in Nicholas County, West Virginia, a son of the late Ruben Jackson and Melba Fern Lee Friend. He is survived by his wife of 57 years, Ina Riffle; three sons: Frank Friend and wife Debra of Norwalk, OH, John Friend and wife Denise of Lorain, OH, and Kirk Friend of Wakeman, OH; six grandchildren: Chasity Smith, Michael, Kenneth, Lauren, Patrick, and Megan Friend; one great granddaughter Kaitlin Smith; two sisters: Almetta and husband Richard Andrew of Heaston Ridge and Carol R. Friend of French Creek; and four brothers: Henry T. Friend and wife Jessie of Rock Cave, Donald N. Friend and wife Betty of Buckhannon, Ruben Eli Friend and wife Clara of Rock Cave, and Daniel Friend and wife Eva of Rock Cave. In addition to his parents, he was preceded in death by one son Kenneth Friend and one brother William Coy Friend. Mr. Friend was a veteran of the U.S. Army. He loved to hunt, fish, and chop wood. He traveled from Ohio after fall turkey season to Florida for fishing during the winter, then back to Ohio for spring turkey season, and on to Canada for more fishing during the summer. He attended the Mt. Pleasant Baptist Church at Arlington. The family will receive friends from 5-8:00 PM, on Wednesday, July 15, 2015, at the Heavner and Cutright Funeral Chapel. The funeral will be held at 10:00 AM, on Thursday, July 16, 2015, at the Mt. Pleasant Baptist Church at Arlington, with the Rev. Robert F. Heavner officiating. Interment will follow in the Canaan Cemetery where the Upshur County Honor Guard will conduct military honors.

The family of Calvin H. Friend created this Life Tributes page to make it easy to share your memories.

Send flowers to the Friend family.