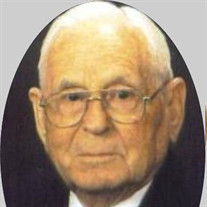 Burl Hartley Gillum, 92, of Roanoke, Virginia, formerly of Pleasant Ridge, West Virginia departed this life suddenly on April 17, 2008. Burl was predeceased by his devoted wife, Irene, his loving parents, Leslie and Lera Gillum, an infant brother, Festus, and his dear grandson, Douglas Burl Gillum. Surviving are his son and daughter-in-law Thomas Wayne and Loretta of Pleasant Ridge, West Virginia; two daughters and sons-in-law Carola and Julian Bell of Signal Mtn., Tennessee, Kay and Bill Meredith of Midlothian, Virginia; six grandsons, Steve Gillum of Georgia, Wayne Gillum of Michigan, Julian, Jon, and Jay Bell of Tennessee, and Edward Meredith of Virginia. One granddaughter Laura Meredith Heitland of Missouri; sixteen great-grandchildren, Jami, Douglas, and Amanda Gillum of Michigan, Baker and Riley Bell, Jerica, Caleb, and Sara Bell, Carlos and Veronica Bell, all of Tennessee, Meredith and Jackson Heitland of Missouri; and Katelyn Gillum of Georgia; one nephew, John Jackson of Virginia. His brother-in-law, Theodore Jackson,of Virginia. Burl’s caregiver, housekeeper, and friend, Judy Francisco had become an important part of his life, as she shared his love for gardening and laughter. Burl was an active member of Hollins Church of the Nazarene, formerly Villa Heights Church of the Nazarene, for forty nine years. During his years of service, he taught Sunday school, served on the Church board, and served as a delegate each year to the Church conference. He also, enjoyed singing bass in the Church quartet. Burl’s devotion and service to God extended beyond the doors of his Church, making mission trips to the Dominican Republic with his church, as well as to the Appalachian Region with his grandsons Julian and Jon Bell and members of their church in Tennessee. Burl’s led a full life. He married his high school sweetheart, earned a teaching certificate from West Virginia Wesleyan College and taught school in Upshur County, W.Va. for several years. From March 4, 1944 until November 20, 1945, Burl served with Company L, 116th of the 29th Infantry Division in France, Belgium, and Germany. Wounded twice in battle, Burl was awarded two purple hearts, and several campaign medals. After the war, Burl worked with the West Virginia Farm Bureau, Educator’s Mutual Life Insurance Company, and retired from J.C. Penny Company in 1978. He continued his close contact with his J.C. Penney retirees, joining them monthly for breakfast. A lover of antique clocks, Burl bought, sold, restored, and built numerous clocks. As an active member of the National Association of Watch and Clock Collectors, Inc., he rarely missed a monthly dinner meeting. Burl also collected vintage gas farm engines. He took an avid interest in the engines, often traveling long distances to an engine show and publishing stories and articles in the Gas Engine publication. Burl was an active DAV member and was instrumental in establishing Chapter 36 of the DAV at Carter, West Virginia. Burl was most proud of the recent publication of his life’s story, The Life of a Farm Boy During the Great Depression, and never ceased to marvel at its popularity, often commenting, “Never in a million years did I think so many people would be interested in reading about my life,” As was typical, Burl had planted beets, radishes, and lettuce two days before his death, telling his friend , “ …we will till when I get back and put in the tomato plants and plot out the rest.” Burl will be sorely missed by his family and friends. He never met a stranger, always had a quick witty remark for every occasion, and if he could say anything to us now it would be, “If you thought you needed to do something for me, don’t worry about it because I have made other arrangements.” Friends will be received at Heavner & Cutright Funeral Chapel on Monday, April 21, 2008, from 5-8 PM. Services will be held on Tuesday, April 22, 2008, at 2:00 PM, at the Funeral Chapel with the Rev. Lynn Riddle and Pastor David Jessie officiating. Interment will follow at the Bethlehem Cemetery. The Buckhannon VFW Post 3663, Frank B. Bartlett Post 7 American Legion and DAV Chapters 5 and 36 will conduct military graveside honors.

The family of Burl Hartley Gillum created this Life Tributes page to make it easy to share your memories.

Send flowers to the Gillum family.