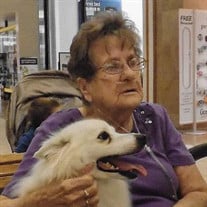 Bonita Jane Slaughter, age 83, of Childers Run Road, Buckhannon, died Tuesday, January 26, 2016, at her home. She was born on June 4, 1932, in Beaver Township, PA, a daughter of the late Ezra and Estella Williams Finlaw. On September 27, 1952, she was united in marriage to Arthur Ray Slaughter who preceded her in death on June 11, 1985. She is survived by one daughter Barbara Slaughter Day and husband Truman Richard Day of Buckhannon; two grandchildren: Amy and husband Michael Farnsworth and Amanda Day; two great grandchildren: Hailey Farnsworth and Bianca Leongtave, and preceded in death by great grandson, Christopher Farnsworth. Also surviving is a special family member who was like a sister to Jane, Dorothy “Aunt Dot” Westfall. In addition to her biological family, Jane was lovingly known as “Mom” and “Grandma” to Lillian Sipe, Cindy Frey, Mike and Kathy Wagner, Shawna Wagner, Donna, Missy, and Ernie Frey, Becky Sipe Boley, Cathy Sipe Johnston, Cathy Ours, Michelle Hyre, Jeff Rapp, and several others, as well as Jason Wagner, who preceded her in death in July 2003. In addition to her parents, husband, and great grandson, she was preceded in death by siblings: Alvin, Edgar, Alton, and Calvin Williams, Edith Beers, Helen Slusher, and her twin sister Glenna June Poling. Mrs. Slaughter was baptized at age 80 and was a member of the Sand Run Baptist Church. She enjoyed crocheting, needle point, jigsaw puzzles, and playing Bingo. The family will receive friends on Saturday, January 30, 2016, from 10:00 AM – 12:00 PM, the funeral hour, at the Sand Run Baptist Church with the Rev. Donald Butcher officiating. Interment will follow in the Buckhannon Memorial Park.

The family of Bonita Jane Slaughter created this Life Tributes page to make it easy to share your memories.

Send flowers to the Slaughter family.