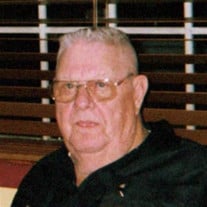 Blaine Edward Winkler, age 81, of Old Elkins Road, Buckhannon, died Sunday, July 26, 2015, at Ruby Memorial Hospital in Morgantown, surrounded by family and friends. He was born on October 10, 1933, in Pickens, WV, a son of the late Dart Augustus and Ruth Lawton Winkler. On April 16, 1958, he was united in marriage to his wife of 56 years, Dora G. Hamrick Winkler, who preceded him in death on July 27, 2014. In addition to his parents and wife, he was preceded in death by two brothers: Clinton and Luther Winkler; and one niece Peggy (Moody) Collette. He is survived by nieces: Kaye (Paul) Tracewell of Dublin, OH, Ruth Longwell of Hannibal, OH, Linda (Pat) Cassidy of Parsons, WV, Ruth Ann (Steve) Marks of Liberty, NC; sisters-in-law: Luretta Winkler of Junior, WV, Dorothy Winkler of Philippi, WV; and special friends Robert and Janet Lantz, Paul "Slugger" and Debbie Brady, his furry friend Tommy, along with many other extended family and friends. Mr. Winkler graduated from Pickens High School and joined the U.S. Army in 1954 where he served as a Drill Sergeant. After 22 years of military service and several tours in Vietnam and Germany, he retired from the Army in 1976. He attended Morehead State University in Morehead, KY and spent many additional years working as a Veterinary Assistant before coming back home to WV. He was a member of the Lions Club of Buckhannon and attended the First Church of the Nazarene in Elkins. The family will receive friends on Wednesday, July 29, 2015, from 5-8:00 PM, at the Heavner and Cutright Funeral Chapel. The funeral will be held on Thursday, July 30, 2015, at 11:00 AM, at the funeral chapel with Pastor Terry Burgess officiating. The Upshur County Honor Guard will conduct military honors at the funeral chapel at the conclusion of the service. Private interment will follow in the West Virginia National Cemetery at Pruntytown. In lieu of flowers, donations may be made to Pickens Presbyterian Church in care of Rosie Dulaney, PO Box 123 Pickens, WV 26230.

The family of Blaine Edward Winkler created this Life Tributes page to make it easy to share your memories.

Send flowers to the Winkler family.