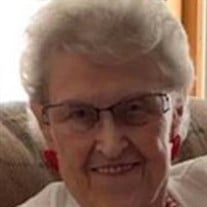 Beulah “Madge” (Barrett) Wines, 83 of Buckhannon, went peacefully to be with our Lord and Savior on Saturday, February 20, 2021, at her residence after a long illness. She was born February 16, 1938, in Braxton County. She was united in marriage on October 17, 1964 to John E. Wines, who preceded her in death on December 26, 2018. Madge is survived by one son Robert Wines, along with a special like-son Bryan Luzader; two sisters: Mildred (Virgil) Jackson of Hiram, OH, and Lena Barrett of Buckhannon, WV. Madge was preceded in death by her parents, John and Ercie (Conrad) Barrett of Burnsville, WV. In addition to her parents, she was preceded in death by several brothers and sisters: Marvin (Trudy) Barrett of Girard, OH, Richard Barrett of Olmstead Falls, OH, John (Karen) Barrett of Struthers, OH, Dewey (JoAnn) Barrett of Burnsville, WV, Mary (Russell) Davis of North Jackson, OH, Rena (Buck) Gregory of Napier, WV. Madge was a member of the Little Kanawha Independent Church and attended Buckhannon Union Mission Church later in life. Madge worked in several service jobs in the Buckhannon area, most notably at T&L Hot Dog for 20 plus years. Friends will be received at Heavner and Cutright Funeral Chapel on Tuesday, February 23, 2021 from 5-7pm. The funeral will be held on Wednesday, February 24, 2021, at 11am, at the funeral chapel, with Rev. Dennis Estes and Rev. Ronzel Roberts officiating. Interment will follow in the Upshur County Memorial Park. The family would like to thank the great professionals at WVU Medicine Hospice, and a special thank you to Beatty Parks for her selfless care of Madge the past several weeks. Online condolences may be extended to the Wines family at www.heavnerandcutright.com The Wines family has entrusted the Heavner and Cutright Funeral Chapel and Cremation Services with funeral arrangements.

The family of Beulah "Madge" Wines created this Life Tributes page to make it easy to share your memories.

Send flowers to the Wines family.