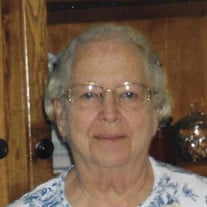 Anna M. Cutright, age 94, of the Rock Cave Road, Crawford, died Friday, January 1, 2021, at the Serenity Care Home in Buckhannon, where she had been a resident for several months. She was born on March 24, 1926, in Upshur County, a daughter of the late Gilbert and Ethel B. Hamilton Gould. On October 4, 1953, she was united in marriage to Wilmer “Darcy” Cutright, who preceded her in death on July 3, 2013. In addition to her parents and husband, she was also preceded in death by one sister Lois Gaston and one brother Joseph Gould. She is survived by one son Gary Cutright and wife Connie of Crawford; one granddaughter Autumn Cutright; and one brother-in-law Doyle Cutright and wife Karen. Mrs. Cutright was a member of the Straight Fork CEOS Club and had attended the Heaston United Methodist Church for over 40 years. She was a talented seamstress and quilter, as well as an extraordinary cook. She loved to feed her family and friends, and especially enjoyed the week of Thanksgiving when the house was full of company that enjoyed her old-fashioned style of cooking. Her willingness to bake a cake or fix a covered dish for fundraisers or families in need was ever-present. While she spent winters working on quilting and sewing projects, her summers were devoted to flowers and raising a vegetable garden, then canning the harvest. She was a devoted wife, mother, and grandmother, and will be sorely missed. The family will receive friends on Monday, January 4, 2021, from 5-7:00 PM, at the Heavner & Cutright Funeral Chapel. A funeral will be held on Tuesday, January 5, 2021, at 11:00 AM, at the funeral chapel, with the Rev. Sue Lowther officiating. Interment will follow in the Indian Camp Cemetery. The family would like to extend a special thanks to those who cared for Anna while she was still at home and for the staff of Serenity Care Home who showed love and offered hugs to her when the family was unable to be there.

Anna M. Cutright, age 94, of the Rock Cave Road, Crawford, died Friday, January 1, 2021, at the Serenity Care Home in Buckhannon, where she had been a resident for several months. She was born on March 24, 1926, in Upshur County, a daughter... View Obituary & Service Information

The family of Anna M. Cutright created this Life Tributes page to make it easy to share your memories.

Send flowers to the Cutright family.