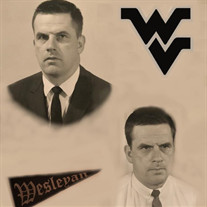 Allan Berry Barlow, 87 of Pittsburgh, PA died peacefully on Monday, January 20, 2020. Born December 5, 1932 in Buckhannon, WV, he was the youngest son of the late Dr. Rev. William Harvey and Rachel Virginia Berry Barlow. Allan is survived by his wife of sixty years, Verla Dimond Barlow, and four children, Mary Barlow (Chester Lampman) of Pittsburgh, PA, Beth Barlow Turman of Biloxi, MS, Allan Barlow, Jr (Joanne) of Strongsville, OH and Becky Moore (Andrew) of Pittsburgh, PA and nine grandchildren and 2 great grandchildren. He was preceded in death by his brothers John H. Barlow of Buckhannon, WV, William (Bill) Barlow of Houston, TX and sister, Marjorie Hunnicutt of Tuscaloosa, AL. Allan graduated from Buckhannon-Upshur High School with the class of 1950, and from West Virginia Wesleyan College in 1954 where he remained a member of the Emeritus Club. He was also a member of the WV Mountaineers Athletic Club. He served honorably in the United States Army from August of 1954 to August of 1956. Following his military service, Allan entered the corporate world. Regarded as an “Accounting Genius” by his peers, Allan achieved much success, eventually retiring from Union Carbide-Elkem Metals Company, Marietta, OH after nearly fifty years of service. Success often meant a promotion, and a promotion often entailed relocation. During his tenure, Allan and his family would become residents of ten different cities and towns including Niagara Falls, NY, Chippawa, Canada, Fostoria, OH, Avon Lake, OH, Humacao, Puerto Rico, Oak Hill, WV, Wilton, CT, Parkersburg, WV, Pittsburgh, PA, Vienna, WV and finally back again in Pittsburgh, PA where he and Verla would settle down to enjoy a well earned retirement and spend their golden years together. Outside of family and career, Allan’s true passion was for sports. In fact his ideal weekend involved attending the local high school football game on Friday night, a college game on Saturday (usually WVU however during his children’s college years he also made time for Marshall University, Ohio State University, and Bowling Green State University), and finish the weekend at the old Three Rivers Stadium to watch the Pittsburgh Steelers on Sunday. Allan’s devotion to WVU was legendary, and many Saturday afternoons were spent tailgating in Morgantown with his brother John and their friends and families, but his love of sports extended far beyond the gridiron. He was equally as happy watching college basketball, and even managed to be present for some significant moments in Mountaineer basketball history. That includes the high-water mark in 2010, when he and Verla followed WVU throughout the NCAA Tournament, and driving to each game as they advanced including the Final Four in Indianapolis. A fan of baseball too, during the summer months he could often be found at the ballpark rooting on the Pittsburgh Pirates. Family and friends will be received on Thursday, February 6, 2020, from 3-8:00 PM, at the Heavner and Cutright Funeral Chapel, 940 Rt 20 South, Buckhannon, WV 26201. The funeral will be held on Friday, February 7, 2020, at 10:00 AM, at the First Baptist Church of Buckhannon, 42 Hart Avenue, Buckhannon, WV 26201 with Rev. Katheryn Barlow-Williams officiating. Interment will follow in the Heavner Cemetery, where the Upshur County Honor Guard will conduct military honors.

The family of Allan Berry Barlow created this Life Tributes page to make it easy to share your memories.

Send flowers to the Barlow family.